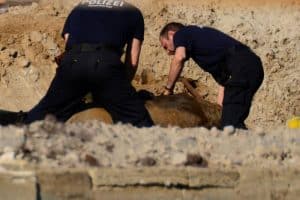 At 3 p.m. on Christmas Day, two bomb-defusing experts from Würzburg got down to work on the explosive. At the time, they were the only two people hired within a mile of where the bomb was found on the job site. With all the citizens out of danger, it was time to get to work. However, even though the citizens were out of town, they still did not want to risk the explosion and destruction of the surroundings.