Germany was in ruins

By the time the Nazis finally waved the white flag, their country was in ruins. In fact, the majority of their country has been reduced to nothing. 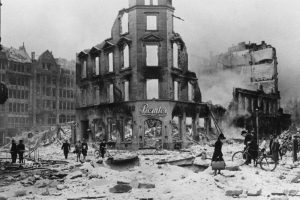 Of the beautiful buildings of Germany, nothing remained but rubble. Everything had been devastated. Indeed, the Nazi soldiers had suffered the defeat of the Allies and in doing so, entire towns had been decimated by the incessant bombardments of the Allies. Incredibly, while some areas of some cities had been reduced to dust, some other parts remained strangely untouched by the bombings.