Still can’t guess who the author of this letter is? When David got on the radio, he discovered that the kind gesture had come from his late wife, Brenda. A month before her death, Brenda wrote her vows in a letter. 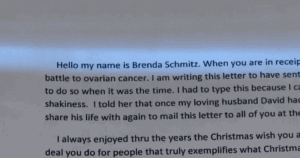 After that, she asked a friend to keep the letter until David met someone new. And when he found a new love, Brenda wanted the letter sent to STAR 102.5’s Christmas wish program.

The letter in question contained his last wishes for David and his new love. It was a very kind gesture from Brenda, who cared that David rediscovers love and that he be happy despite her absence. For Brenda, nothing was more important.